In this post, we will tell you how the Aluminium Space Frame and Carbon Fiber Shell was Manufactured and the difficulties we faced and the challenges we overcame.

We started with discussing the type of chassis to use for the competition. We had three options. A Monocoque chassis, Carbon Fiber (CF) Space Frame or an Aluminium Space Frame. The CF Space Frame uses CF tubes to make up 3-dimensional truss structure and is expected to be the lightest. But the complexity involved in joining the CF tubes was a milestone for us. We decided against this and have come to an agreement that we will research on this matter later. Then we came to the question of using a monocoque chassis. We would have gone with this, but our finances weren’t enough when we started. So, we cancelled that off the list. The only option left was the Aluminium Space Frame. We have had quite some experience with the Aluminium Space Frame and we knew that it would be easy and cheap to design and manufacture it. So, we decided that we would use this for our car.

We started designing various models, which would give us the least weight without compromising the structural integrity of the chassis. The design phase lasted almost 2 months. Usage of circular cross-section of Aluminium tubes was ruled out after some research, as rectangular tubes provide more bending resistance and are easier to machine and assemble. We did 4 iterations and finally came up with a satisfactory design. Since the start, 19mm square tubes with 2 mm thickness were incorporated. But we missed the point that increasing the side length would reduce the bending by a significant amount and also the complexity of the structure. Our final design consisted of
25mm square tubes with 3mm thickness and a bent roll bar. The shell designed also was done in a few iterations. The coefficient of drag value for our final design was 0.25, which was satisfactory. The shell is designed to be as close to the chassis as possible and the tried to imitate the shape of a shark. 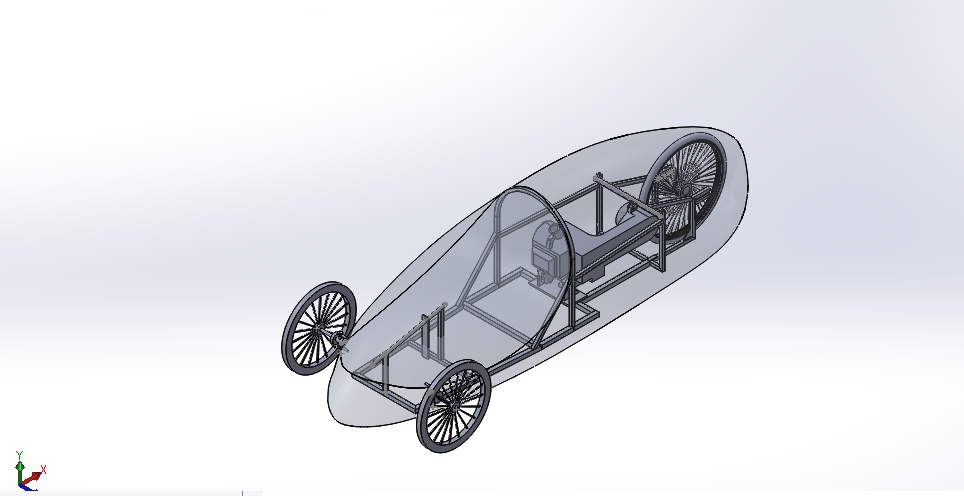 Coming to the Manufacturing, we procured all the materials required within a day. The bent roll bar posed a problem as it costs around 2000/- per tube to be bent and we would have had to go to Chennai to get that work done. We were financially unstable then and also didn’t have enough time to do this work. So, a quick design modification was made and the bent roll bar structure was made flat. This was quite a setback for us, as a bent roll bar would have been perfect for the shell to sit on. There were a few other design modifications which were done during the manufacturing like the engine mount. The issues that we faced will be described in the later section of this text. Hence, after 3 days of hard work and bunking classes, we were finally done with the chassis manufacturing.

The Shell Manufacture was particularly important. This stage has required us to set up a composite work table. Once we were at this stage, we had to decide the material with which the shell should be made. We had Glass Fiber (GF), CF and Kevlar in mind. So, we made a prototype shell, which was scaled down by almost 25 times. The mould for the scaled down model was made of thermocol and we shaped it as close to the actual model as possible. It was reinforced with GF. The main objective was to predict the manufacturing difficulties and how to rectify them. We decided against using Kevlar as its bonding with CF or GF was less effective and some other agents were to be used to make it right. We laid up GF layer and CF layer on top of it. We experienced how easy it was to drape CF over the mould than GF. So, we came to a decision of using CF for our shell. The scaled down model was manufactured by the process of Vacuum bagging. The part of the mould which was not reinforced properly with GF got compressed and compromised the shape of the final model. So, we took necessary steps for the actual shell mould and shell manufacture.

The shell mould was made of thermocol too. We generated sketches along the body of the shell design and got them printed out. The printing was done in different sheet sizes ranging from A0 to A4, using the appropriate sheet at the appropriate location. Later, the sketches were used to cut out the thermocol sheets in the proper shape. A proper reference point in each thermocol sheet was marked and two sticks, one from the front to the half and the other from rear to the half, were inserted through them. This structure was stacked using an adhesive to bond them together. After giving the adhesive, the time to dry, we sanded the structure. Plaster of Paris (POP) and Putty on it were used to harden the shell mould and later sanded. Finally, the mould was reinforced with GF. The shell mould was covered with moulding wax, which helps in easy de-moulding. The final shell was nothing like the designed one. This was because of our negligence in the shell mould manufacturing. We have used only two layers of CF. The shell’s structural properties were satisfactory. However, we were aware of the fact that it needs to be reinforced after all the machining is done (hatches, windshield etc.)

The mounting mechanism for the shell was easy in concept, but careful work had to be done, as an issue here would result in the shell collapsing and invalidating the lap (in the competition). The mounts were made of Acrylonitrile Butadiene Styrene (ABS). The ABS that we used was of the thermoformable grade. We weren’t worried much about the strength, as ABS could be reinforced using composites. The ABS was thermoformed and stuck to the chassis using GF composites. We didn’t use CF, as any cut in the surface of the chassis tube would result in galvanic corrosion and create problems. The windshield part was cut out by verifying it with our driver. Similarly, the driver hatch and the side view panels were cut out. The openings for the engine compartment were created after the engine department expressed their thoughts on this matter. The windshield and the side view panels were made of Polycarbonate. The panels and the windshield were riveted to the shell. The seat was made of CF.

A lot of brainstorming was done for the bulkhead. We made a temporary bulkhead for testing purposes. Later a sandwich composite bulkhead was with ABS as the core. GF is used for the firewall. Two layers of GF were sufficient to get a proper structure.

This is how we were able to complete our Design Part.

View all posts by embyness